A Little Snow Discovery - Cafe If

It's kinda hard to believe that we are almost three weeks into the new year.

And already I feel like we've been thrown back into the deep ocean once again. A sudden drop from the vacation high. Ah!

I can already tell that the academic portion of the year is going to more intense than before and I've prepped myself mentally to be more consistent and to be around more for the boys this year than last. I can safely say the 'honeymoon' period for K is over! (Lucky Jake still has one more year to cruise.)

So to close off 2013, we whisked everyone off to Japan for a bit of shopping and skiing. It was quite a no brainer as we wanted the kids to carry on from where they left off in ski school. And I must say they did really well! Each of them can now ski down a beginner slope rather confidently. Even the little one. And my! these kids are total dare devils! They are definitely much faster than D and I! (Old fogies, we are now. *hangs head*)

But Japan was brilliant. It always is. We literally shopped till our hearts stop (and so did our bank balances too!) and we had an exceptional time eating our way through as well.

It is not easy to sum up the whole trip in one post.

So let's begin with my favourite discovery of this trip. Cafe If.

Located at the junction of upper and lower Hirafu, it is a tiny cottage that serves pasta and cakes. We chanced upon it when walking back from dinner at Rin. It was exactly like the homes described in Little Match Girl by Hans Christian Andersen. Unfortunately, it was closed by that time so I made a mental note to head back the following day. (which was the day we were leaving Niseko) 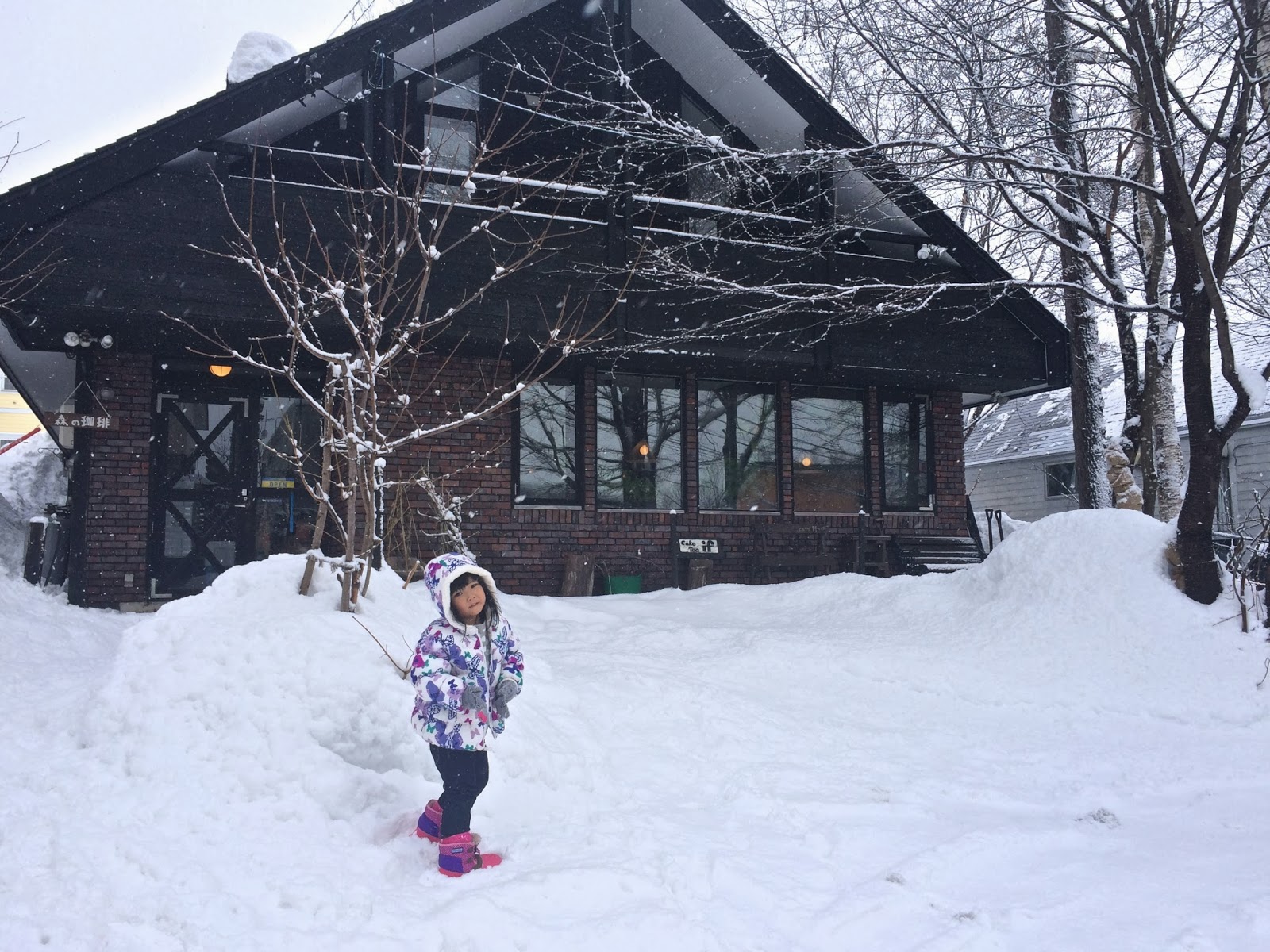 So I walked back with Little K the following morning and it was snowing as we made the trek. We were totally in a rush because we had to have breakfast elsewhere with our friends and we had a private bus waiting for us.

Once I walked into the cottage,  I literally paused as it was one of those that was so well preserved and obviously have seen the seasons change. It's not luxurious but quaint and well kept. They didn't serve breakfast but the old lady, with her limited english, said she was famous for her strawberry shortcake and cheesecake. I asked if I could take away some and she said "No because it won't last." 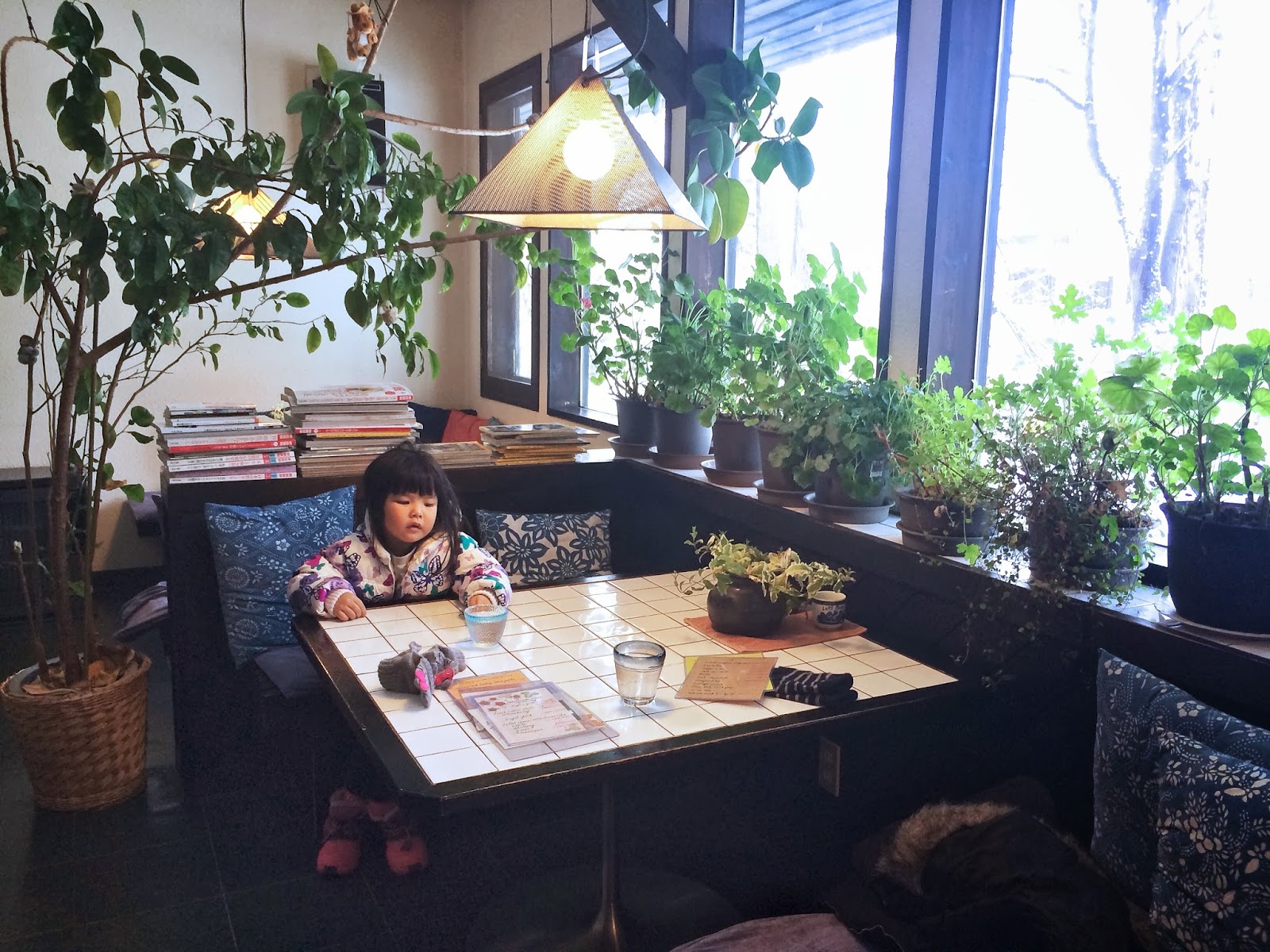 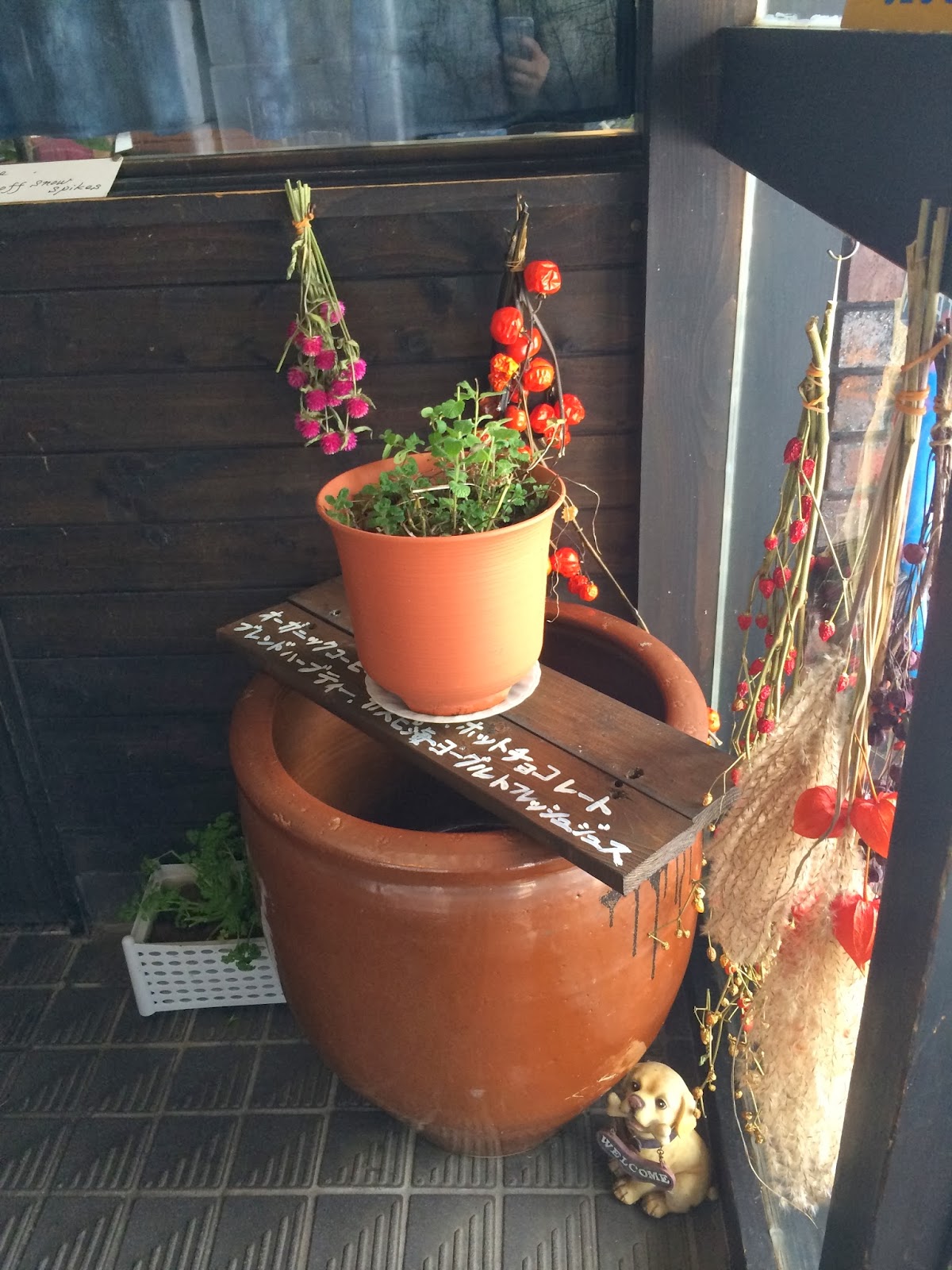 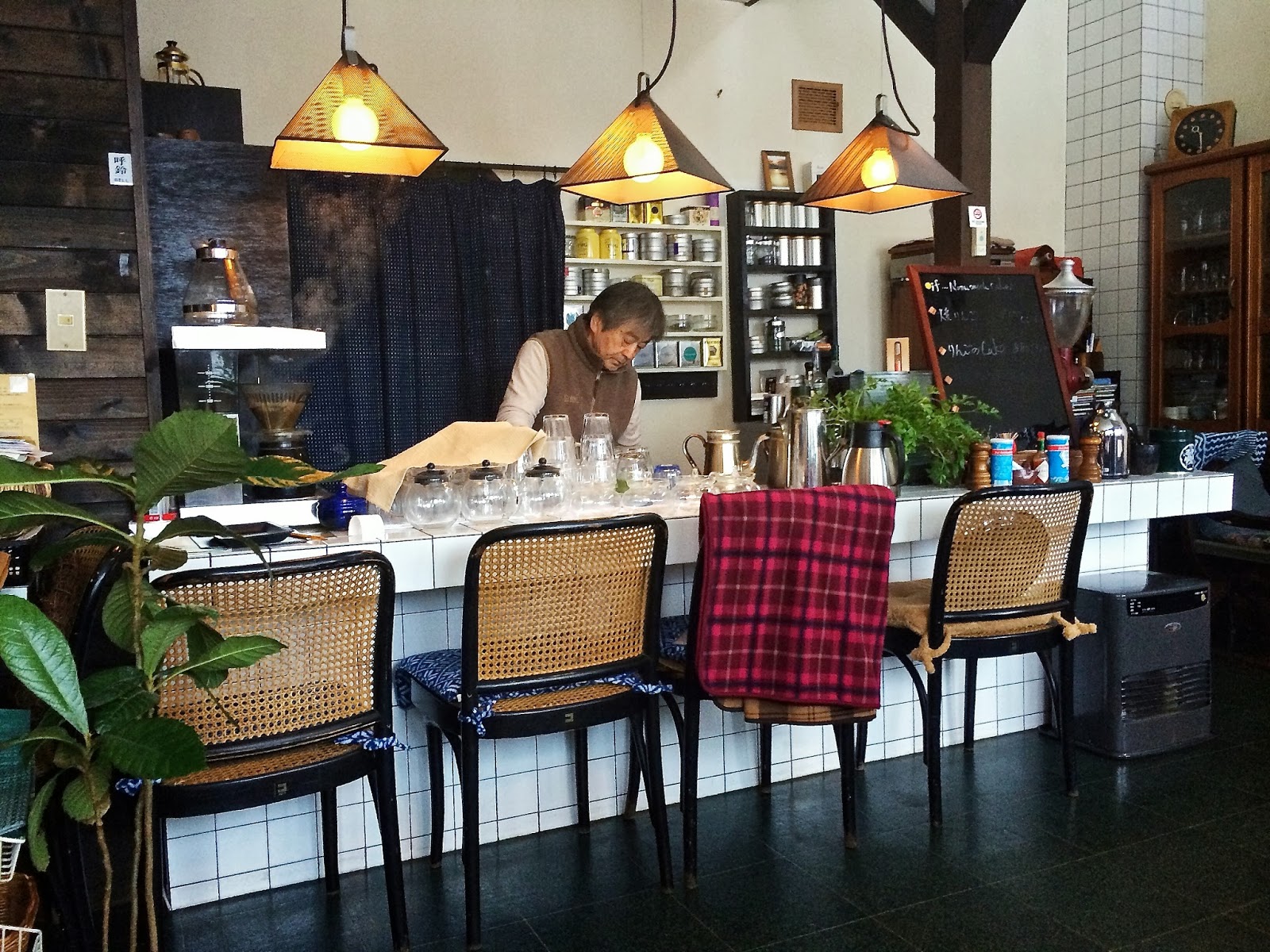 So little K and I were ushered in and we ordered quickly. "A hot chocolate and a strawberry shortcake, please." And then we waited. The food didn't come immediately. In fact, we sat and waited for quite a while.

It was such a treat sitting in that cottage that morning, with the snow falling outside. The interiors were filled with pots of green plants. It really felt like we were having tea in someone's living room.

Both K and I started observing the older gentleman slowly adding the milk as he mixed the cocoa. If you know Angelina's famous Parisian hot chocolate, this can definitely rival it. It's thick and luscious. A drink that requires slow sips and appreciation. 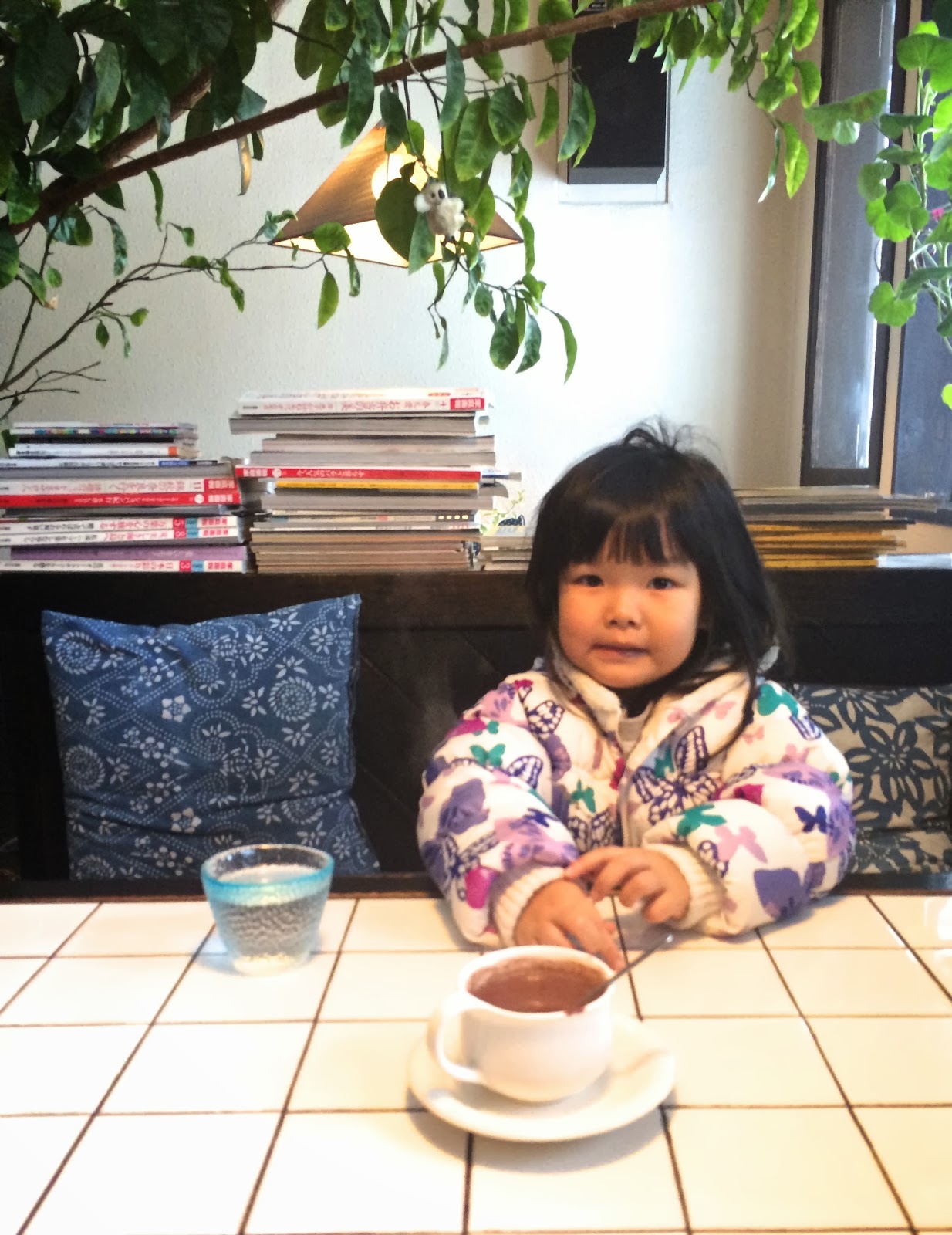 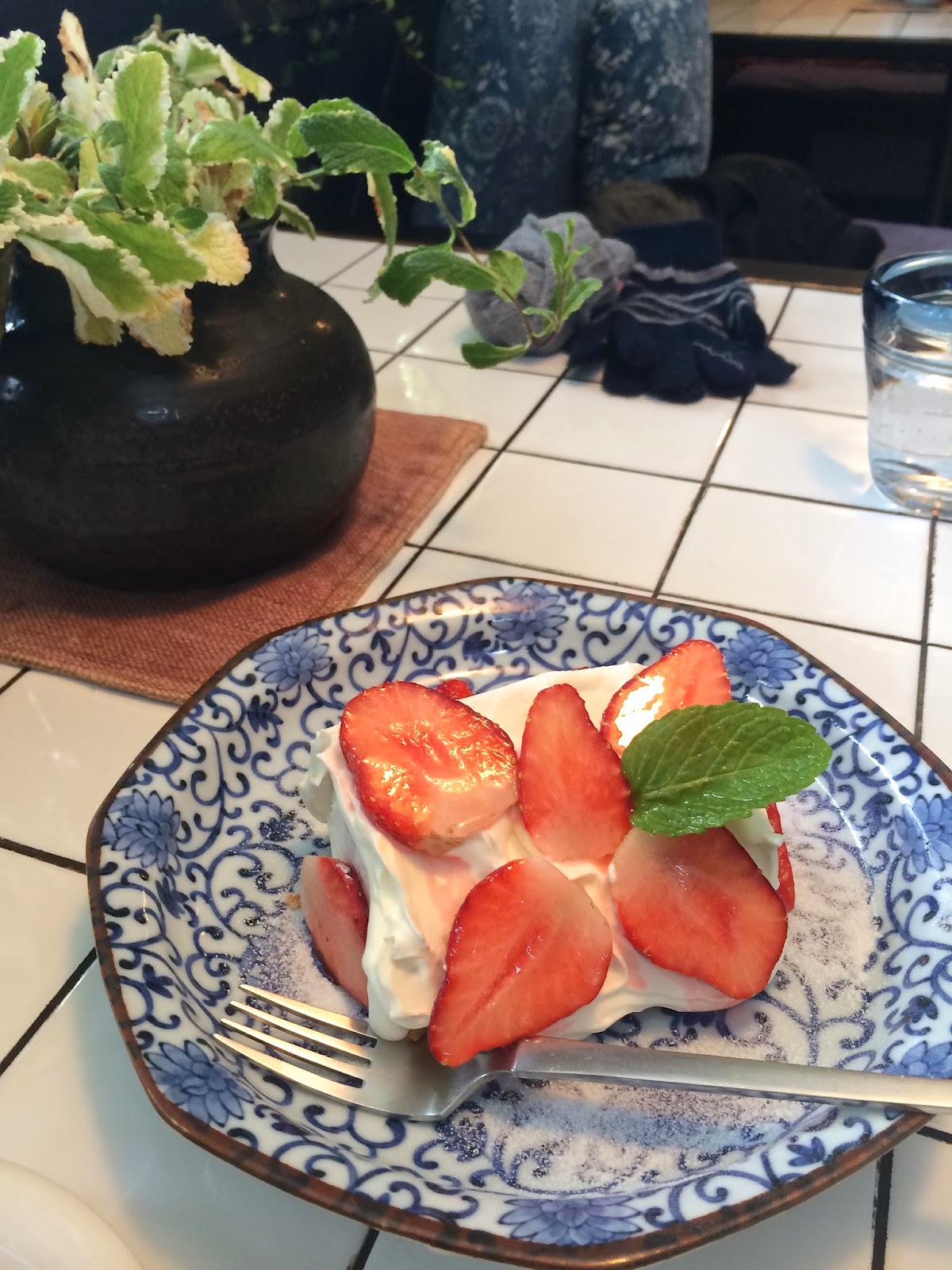 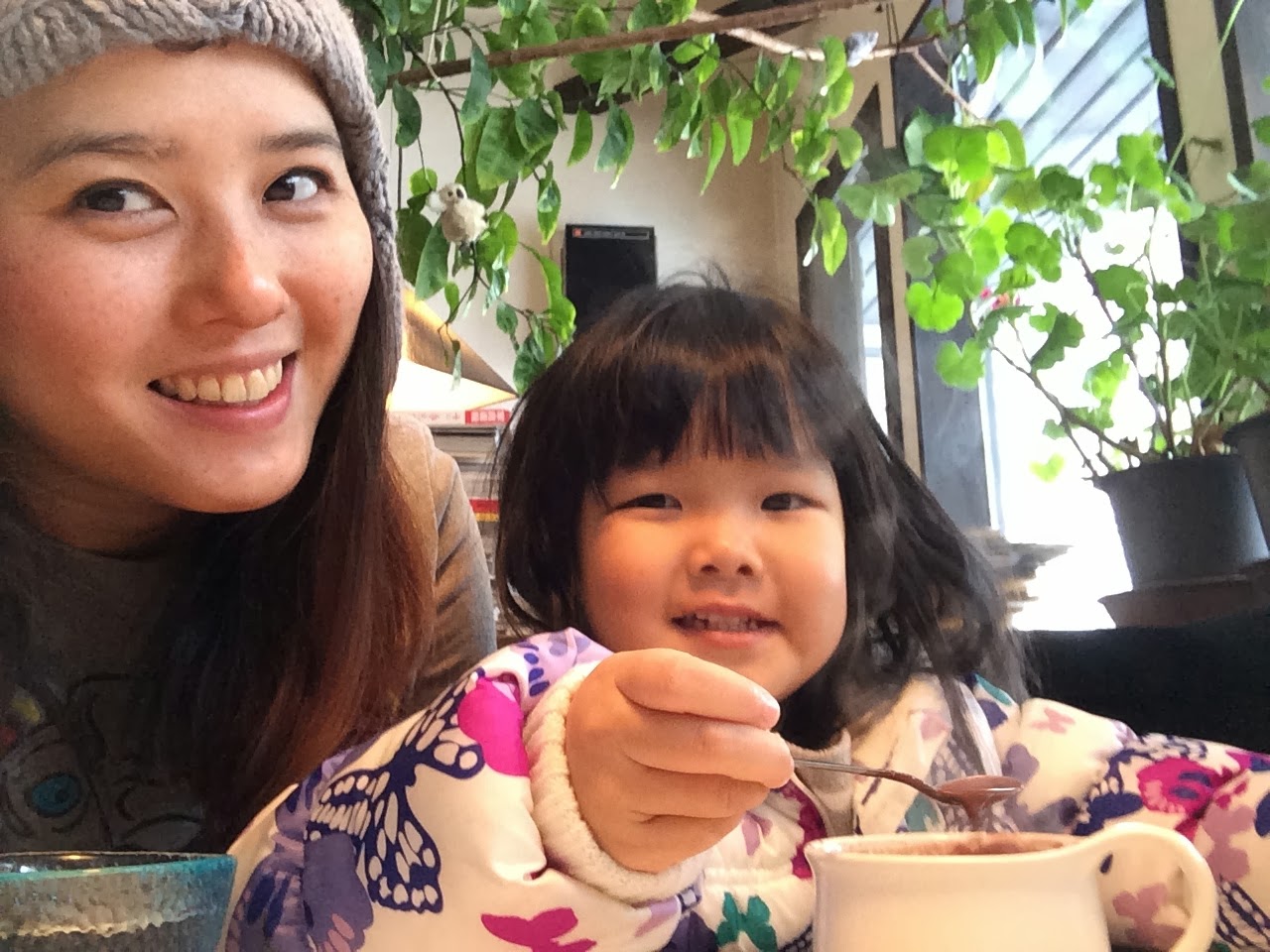 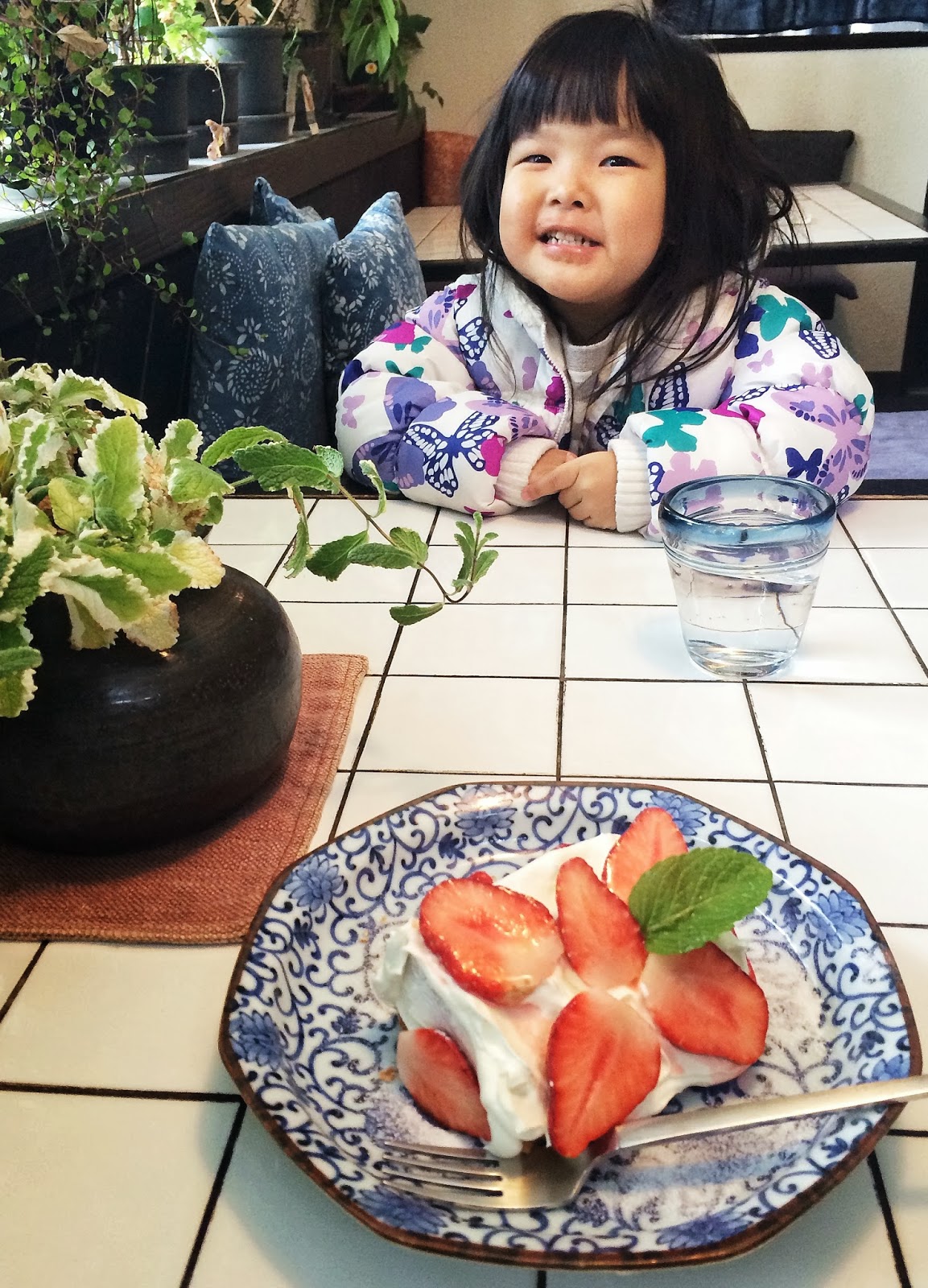 Next, came the strawberry shortcake. When she brought it out, I finally understood why it wouldn't survive being a takeout. It was a two layer soft sponge cake with a generous serving of strawberry jam in between. And a glorious layer of freshly whipped cream covered it with carefully placed sliced strawberries all over it. It was crazy madly good. In that moment, it felt like time has stopped. Even Kate knew it was something amazing as she sighed through each bite.

And because all good things have to come to an end, we quickly devoured the cake and wiped out mouths as we thanked the elderly couple for their kind hospitality before paying and rushing back.

It was one memorable experience and I'm hoping that they would still be there when I return.