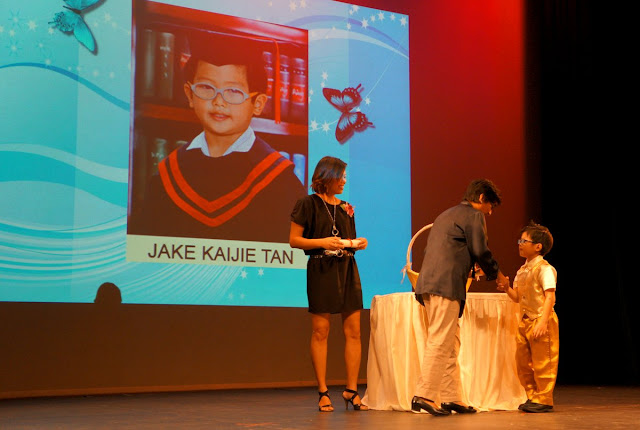 Jake has always been our baby boy. As a second child, he always skips in the shadows of his kor kor. He grows as his kor kor does and often relies on him for help most times.

But it seems that no matter how old he gets, he's always that little boy in our eyes.

We have been so busy weeks prior to his concert today. He's been practising hard in school for the last few months and was very excited about it. They have been told to keep the details a secret so that us parents can be surprised on the actual day,

I picked him up from rehearsals on Thursday and there he was in his full costume.. I felt like a frog got caught in my throat because it was the first time I felt that he's already finishing kinder.

It hit me like a ton of bricks that he will no longer be the same little boy who's sheepish and shy when he first started school. He has finished 4 years in preschool and is now ready to take on the challenge of primary school life.

Anyway, the theme of yesterday's concert was 'Wonders of Love' and the kids showcased their singing, dancing and acting talents through different skits and plays.

I loved how they opened the show in complete darkness with sparkling lights and pure untouched children vocals singing Christian songs. It was at that moment when I felt a lump in my throat.

Jakey's class did a musical performance featuring the angklongs and xylophones. He was pretty spot on in the sections he was meant to perform. Seeing the amount of concentration he had during the songs really showed how much he has practised in the weeks prior.


What I noticed,  too, was that he didn't enjoy the singing and dancing parts as much as his kor kor. He was a little bored and would space out in between some stanzas in the songs.

The poignant moment was when they read his name and he confidently strutted onto the stage and shook the lady's hand before smiling boldly and posing for a picture. Man! He looks so grown up there.

Three hours later, the concert finally ended with a prayer blessing the kids as they go forth onto the next phase of life.

The boy was all smiles when we collected him and he was lapping up the praises that we showered upon him. What a day it was! And another chapter closed! =)