We were there on day 1 and the workers had almost had the entire house torn apart.

Prior to this, we actually had a few meetings with IDs and a contractor to see which route we would take to redo the house. We initially planned to have an ID to oversee the project. There were some really good ideas being thrown on the table. However, I think the quotes were very much over out budget. (Location and type of property counts in the quotation too) Therefore, we decided to opt for a contractor to renovate.

We were recommended one by the girlfriend, whose house was done up by him, and after a few conversations, D decided that he would proceed with him. Without an ID, we had to be vigilant in following up.

Fortunately, we have a pretty good idea on how we would like to do up the place. We're also blessed that we have good advice given by our friends who are in the industry. Which really makes things a lot easier in terms of choosing an overall look, color theme and detailing. 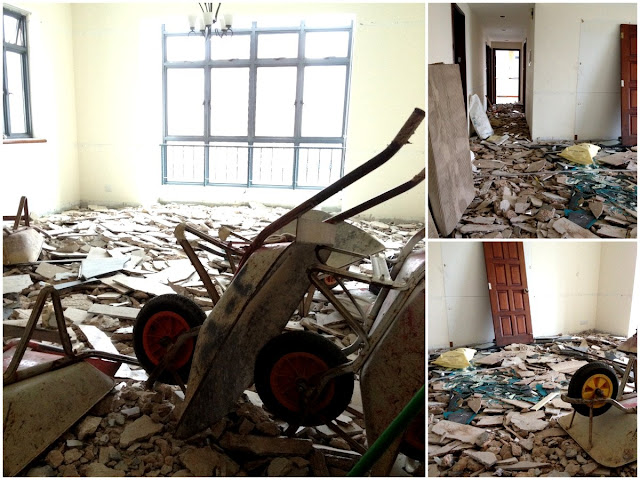 The hacking was done really quickly and by day 2, they were busy clearing the rubble. It took a couple of days because the condo stipulated that the contractor can't put a skip in the car park. So they had to push out wheelbarrows of rubble across the road, which clearly took longer than usual.

Initially, when the contractor told me that the entire project would take 5 weeks to complete, my eyeballs almost pop out in disbelief. However, it seems like he is pretty organized and on the ball with it. 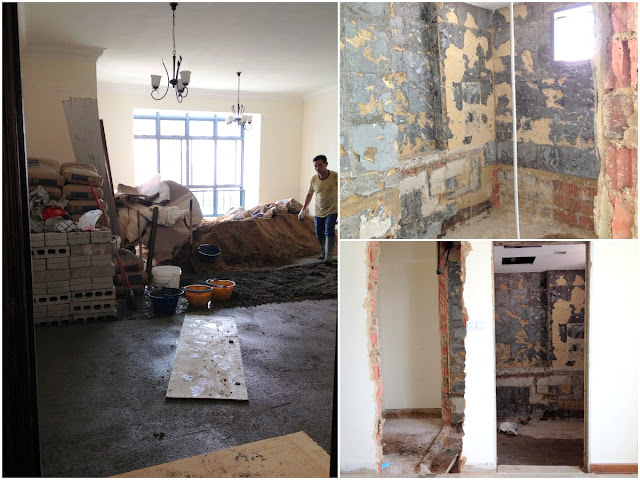 I went to the site today and was met with an almost complete cemented living room. So, overall, we are pretty much on schedule for most things.

There's still plenty to do like choosing sanitaryware, settling the blinds, choosing the kitchen appliances and finalizing the laminates. We have a few options in mind. It just all comes down to confirming details.

We will slowly and surely get there. The tiles have been confirmed today, after a slight delay, because of a major hiccup last week. The husband has the girlfriend to thank for helping him out when he gets into trouble with me. She always saves his pretty little bum!

Can't wait to get this phase done so that we can move onto tiles laying.
Posted by Pam at 12:40 AM

Email ThisBlogThis!Share to TwitterShare to FacebookShare to Pinterest
Labels: House