A Brown Bear, A Moon and A Caterpillar 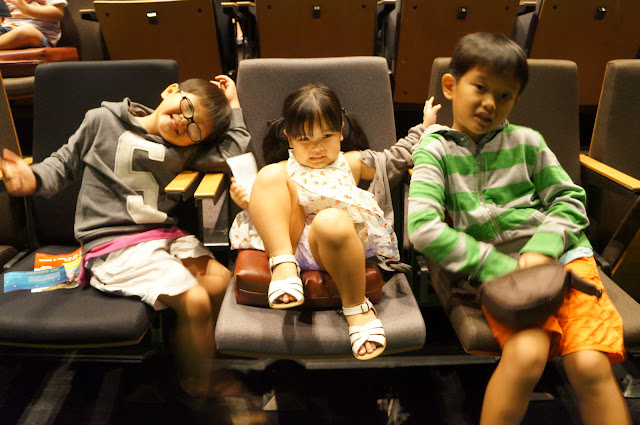 We are big fans of Eric Carle's series of books in this household.

In fact, Kate's favourite book of all time is "Polar Bear, Polar Bear, What do you Hear?" She loves the repetition in the book and would often chime in when I'm reading it to her. She's a big fan of the other two books that were performed too.

So, the other weekend, when D was out of town, my girlfriend and I took the kids to the Act 3 International's A Brown Bear, A Moon and a Caterpillar: Treasured Stories of Eric Carle, which was performed by the Mermaid Theatre of Nova Scotia Canada.

I managed to score front row seats for us all back at the pre launch.

The use of 'black light' puppetry made the entire performance rather interesting for the two younger ones. J was busy reading his lines aloud to all three plays and Kate loved the animation of the Hungry Caterpillar. She was just wide eyed and giggling throughout.

My almost seven year old, however, caught on to how the animation was being portrayed and he kept whispering into my ear how each move was being made. =) I had to tell him to keep it down so as not to spoil the performance for the two younger ones.

I love how the puppeteurs would come out at the end of the play to answer questions from the kids. Also, how they encourage the children to chime in if they knew the words to the play as it was performed. Overall, a good live theatrical act for the kids. =)
Posted by Pam at 4:43 AM