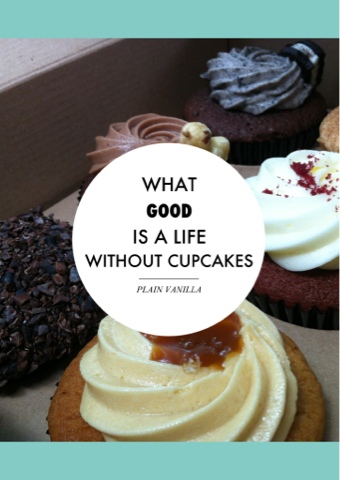 With the myriad of cupcake stores opening all around the island, I think we have embarked on a journey to find the best red velvet cupcake ever!

So yesterday, we checked out Plain Vanilla. :)

A quaint lil cupcake store in a lil nook at Holland Village.

I liked what I saw. If I could bake that well, it's what I would set up. :) The gals were very lovely and they were extremely charmed by lil K.

I bought half a dozen of different flavours. It was devoured in less than 5 minutes. I loved how 'homemade' it was. The red velvet hits all the right spots. I could easily go for two of those. (That says something cause I have a rather huge soft spot for the ones at marmalade pantry because of the coconut sprinkling.)

They open from 12-8pm(other than Sundays where they close at 6) but I would probably call to see what is available if you are heading down in the later part of the day cause they were all sold out when I visited on Friday.

Will definitely come back again to get some more for the kiddos!

Email ThisBlogThis!Share to TwitterShare to FacebookShare to Pinterest
Labels: Foodie