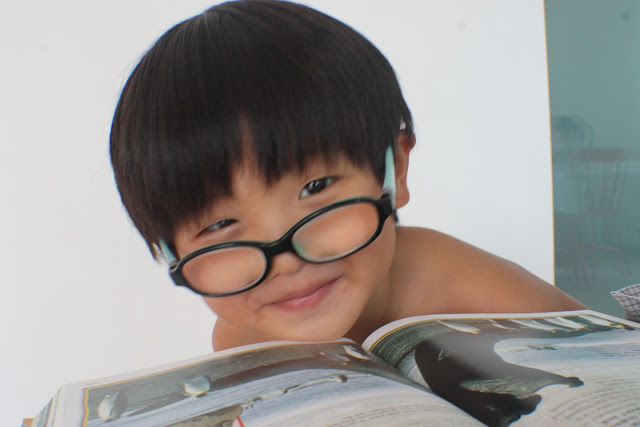 This boy probably gets the least mention in this blog.

It is not because I love him the least.

But he is my most laid back kid. Happy go lucky is the term to describe him. Very fuss free. (which is needed when you have three kids)

For him, he's ok if he is under the radar. He doesn't ask for any classes to attend and he prefers to just chill at home.

He loves to play with his trains and cars. Read his Tin Tin comics. And sing and dance. You should see Kate and him doing the Hi 5 dances. It's amazing how choreographed they are.

I won't say that he's the most docile child because he won't allow anyone to bully him. We have had instances where he would tell kids off if they cross the boundaries.

I'm not sure if he sees the world differently because of his vision but he's just whimsical in his own ways. He loves to draw and man there are plenty of details in his work.

After a bit of a jaunt with his violin, we stopped lessons for a while cause he wasn't enjoying it. So now he's asked to play the piano. Which I happily obliged. It also helps that he's got a really sweet and pretty teacher. =)

Lil K and him spend the most time together. They play and, yes, fight during the day. Sometimes it's over the scooter that she has. Sometimes, it's over little silly toy. But still they are best mates who share silly giggles during the day. It makes my heart glad.

I love having three kids. Even though they drive me batshit crazy sometimes. But it's still a whole lot of joy at the end of the day. Especially when they are sleeping. *wink*
Posted by Pam at 10:57 AM