A Week of Firsts.

We are Day 4 in the first school week of the year.

It has been sheer madness trying to get three people out of the door before 7 every morning. (I'll tell you more about our 630 wake up calls later but there is little joy in waking up before daybreak. =().

So it has been pretty epic because we have not one but TWO kiddos stating new schools this week. It has been such an emotional roller coaster and week of adaptability for all of us.

And here's how it goes. 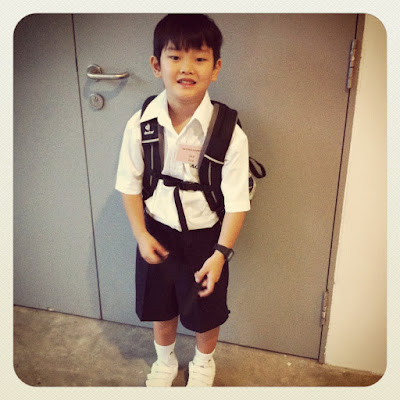 Kayden - Day 1.
It was easy rousing him up for his first day in his big boy school. The excitement has been building up for a while and he was keen to get his engines going. So after jumping up immediately to shower, he scoffed down his brekkie and put on his shoes to leave. 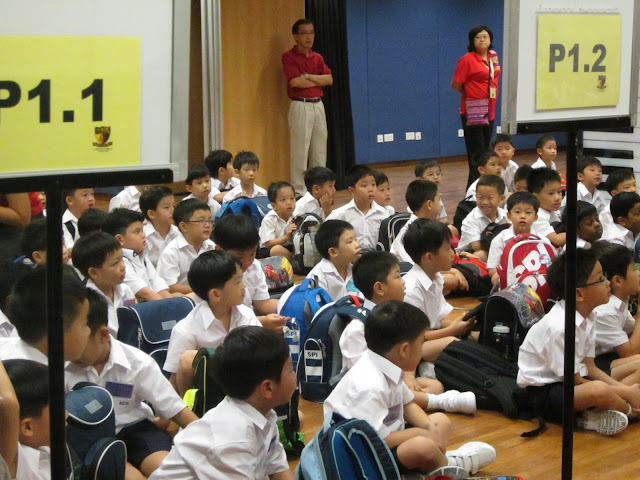 When we got to the school, we were met with a ton of parents with their SLRs and digicams capturing every moment of their kids' first day in school. So after a quick kiss, he was off to join his classmates.

Parents get to hang around the school for three days and then the boys are on their own.

However, as I volunteered as a parent shepherd for canteen duties, I get to be around for the first month. Poor kiddo thought I was kidding when I told him so.

So what did he get for his recess break? A burger, a cuppa milo and one ice cream. Not bad for three bucks, huh?

We left right after and I got D to do the school pick up this week. (which he was late for the first day cause the kids were released half an hour earlier but we didn't know.)

Day 2
There was a drag in the waking up process. Poor thing couldn't get up. But after a shower, he was feeling much better. We dropped him off and didn't linger around this time round. Other than the recess duty, he was faring quite ok on his own.

Meal choice of the day - A hot dog and a drink. 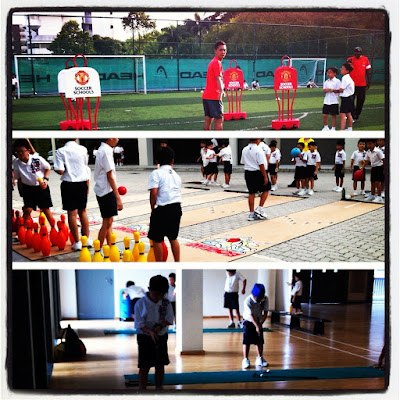 Day 3
It was CCA day. So parents were invited to see what the school had to offer. They are pretty big on CCAs and strongly encourage even their Pri Ones to try and participate in at least one.

The boy asked if we could drop him off but with the ton of books in his bag, we said that we would walk him in instead. It was H E A V Y.

D and I scurried off for some much needed caffeine fix before returning to school. It was a flurry of activity there. The boys had so many options to explore in their CCAs. We walked around and had a chat with a few teachers about their respective sports before I left for canteen duty.

So far, we are liking the school. The boys look happy and are pretty polite. There are plenty of sports for them to be engaged in and we are glad that we chose it.

The boy was a little late in coming to the canteen and after buying a drink, he said he had no more $? Only when I told him he had two more $$  and he could go buy a plate of spaghetti, that he realised his blurness.

He later said that he likes a couple of CCAs and would like to join them so I've signed him up for a few and see which one he would get into. (Cause they normally only get into one)