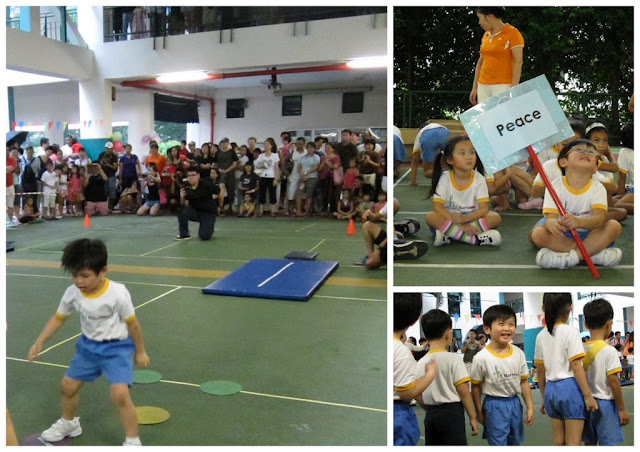 Jakeyboo had his first ever sports day on Saturday.

The lil fella was so excited that even a sudden downpour that day didn't dampen his spirits.

The school had organized the event for the kids in nursery and kinder 1. It was meant to let the children have fun and educate them about healthy living and sportsmanship.

There was already a crowd of parents at the venue when we arrived. Everyone was just armed with a digital camera or phone.

After singing a few songs to warm up, the kids got ready for their events. There were all sorts of relay games that the teachers came up for the little kiddos. And they were all so fun. In fact, everybody went home a winner that day cause the school wanted the kids to just have an enjoyable experience with their fellow classmates.

Us overzealous parents were rooting the kids on with lots of cheers and yays! I think poor Jake would've been embarrassed by his enthusiatic parents who were just cheering him on as loud as we can. =p Oh well, this is just the first one, kiddo.

In fact, D and I were very surprised at how agile Jake was. He was as quick as lightning when he was going through the race. And I can imagine D's brain going... This kid has so much sports potential! 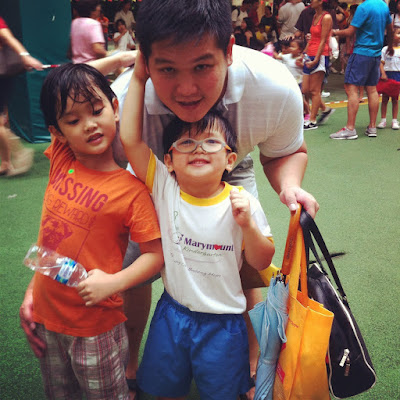 Jake had such a blast. When we picked him up, he was busy chatting with this friends and couldn't stop smiling.

And that is one of the reasons why we love having our kids in this school.
Posted by Pam at 9:00 AM