The Squint - A Year On 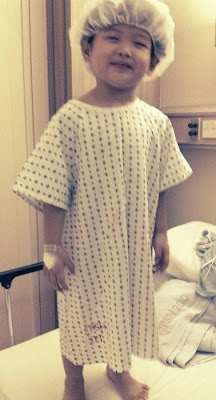 Since the last time I spoke about Jake's squint,we have changed three opthamologists and he has been on glasses since, which he would need for his long sightedness.

We didn't have a great experience with the first opthamologist. The second was such a lovely lady but she was a lil conservative with her approach.

So, in the earlier half of this year, I'd decided to seek another opinion at TTSH.

This time round, they ran the sames tests but they were able to get a better response from the boy. I guess, he is a lil older and also, he is able to convey his reactions in words.

At first, Dr Leo suggested that we go full strength with his glasses and we did that. However, after 4 months and minimal progress with the squint, she strongly recommended that we opt for a surgery to correct it.

Jakey has this thing called the residual squint. That means that the eyes will still be misaligned despite the aid of glasses. In his case, the muscles near the middle of the face, are pulling his eyes inwards when he is focusing on a particle thing. This also causes his eyes to intermittently switch off individually, creating a lazy eye symptom.

So last Wednesday, it was time for the surgery. 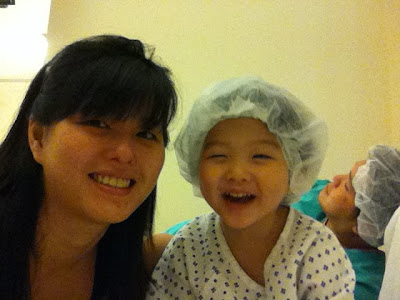 To say that we are worried is an understatement. But you'd probably can't tell cause we were pretty calm on the surface. We deliberately kept the boy in the dark about the surgery because, really, how do you explain to a four year old that he is going under GA and someone is going to cut your eyes open?

We'd simply told him that he was going to get his eyes fixed that morning. 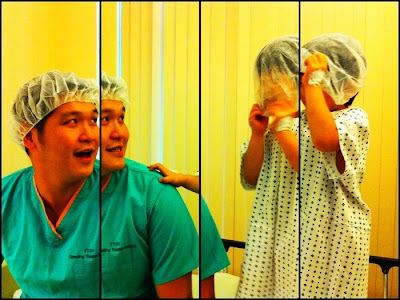 The pre-op staff at TTSH were pretty good. They kept him entertained with color pencils and toys whilst prepping him for the surgery. He didn't suspect a thing until D brought him into the operating theatre.

The surgery was over in an hour. The alignment was exactly how they had predicted when they did a follow up the next day. So thank God it all went according to plan. 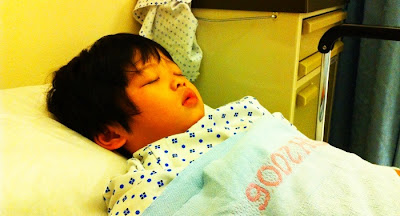 Poor kid was so drugged out by the anesthesia that he slept for another 5 more hours after the operation and he almost didn't wake up until we tapped shook him awake. And then he was almost stoned for the rest of the day.

The recovery process takes another eight weeks and then we go back to see if the alignment stays permanently. Hopefully, by then, his power would also come down and that would be the best Christmas gift for my little boy by then.
Posted by Pam at 8:25 PM