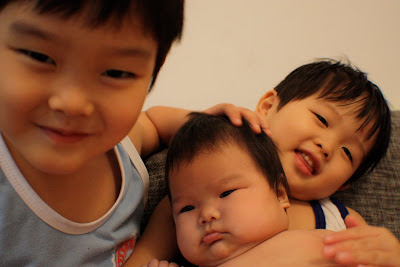 It's official! I have 3 kids!!
So after 12 weeks of change and adaptation, it has finally hit me that I have three lil 'uns under 5.
Now, stats would tell you that it is not the best thing to have in a perfect family planning set up, but, I must say, that I am actually having a ball.
Transiting from one kid to two was easy. Especially when the boys were so close in age. They literally went through the same stages, almost at the same time! They ate the same stuff. Played well with each other. Plus, it was easy bringing the two of them out because I had a double pram. So it was cushy times.
Moving on from two to three took a bigger step. Firstly, I had the boys routine downpat. Secondly, it's been awhile since I had a baby.
But I think God has been good because the transition was really smooth.
Kate has been such a great baby to look after. She sleeps through the night. She feeds really well. The boys love being big brothers. The lucky gal gets kisses when she wakes up every morning.
And when I am driving, they would help me to either feed her or keep her occupied so that she would not cry. They would put her dummy in her mouth or talk to her. Sometimes, Jakey would hold her hand to let her know that someone is sitting next to her.
The biggest fear I had was going out with the three of them. (Keeping them at home is so easy but not possible!)
But it was quite uncalled for! Because the boys are now used to walking on their own, without a pram. And if both of them are tired, we'll either head home OR I'd put on the skateboard on the Bugaboo so that they can stand on it. Easy done!
Some days are a lil bit more work than others but I guess we can't really have it all. =)
So yes! I am now a mommy of 3 under 30. It wasn't on my life plan but I guess if you can't fight it, just go with it! Plus, it's really not that hard, especially when they are the three littlest people that you love most in your life! =)
Posted by Pam at 10:36 AM