The thing about raising boys is ... sometimes they tend to play a lil rougher than what you like.
We were watching GG on DVD on Sunday morn whilst the boys were busy chasing each other around the apartment.
Then all of a sudden, we saw Jake trip over his own foot, fall towards the basketball stand and then tilting towards the metal edge of the door of the TV console.
All in SLOW MO.
There was that usual silence before the big wails began and we knew that it was going to be BIG one.
(Something similar had probably happened before. =/)
We immediately went into autopilot. I picked him up and plonked him on Darien and then ran to get a towel to press the wound.
Turns out, our own lil klutz hit his forehead and got himself two lil diagonal slashes, slightly more than skin deep.
My heart broke just by looking at the wounds.
Thank God he is ok! Because after heaps of cuddles, he went back to playing with his toys.
As for us, we are definitely keeping those doors shut now.
Dun wanna risk another fall like that! 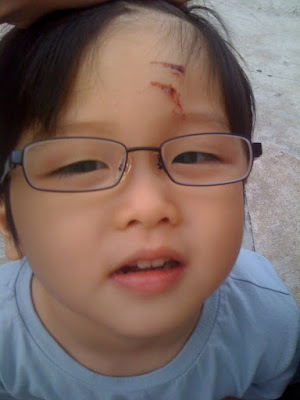 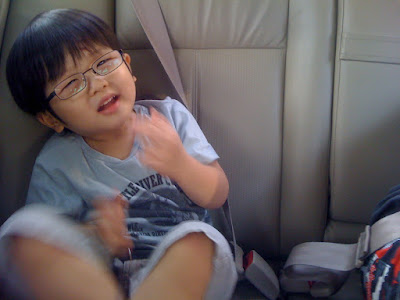 As if nothing has ever happened!
Posted by Pam at 11:11 PM