7 Weeks Update - My not so new newborn. 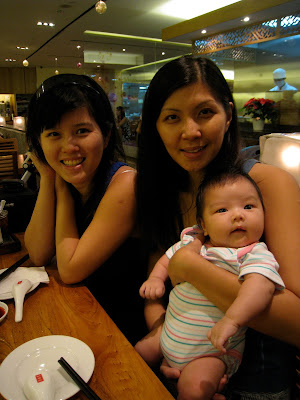 My baby smiles!
Seven weeks isn't typically a long period of time.
In fact, more often than not, it passes in a wink of an eye.
And, thus, in this timeframe, my lil gal has moved on from being the sleepy doe eyed bub to one that is rather curious about her surroundings. Her lil munkee friend
She doesn't like to be left alone. Usually I leave her on the bed or her cot whilst I try to do some stuff around the house. After 10 minutes or so, I would hear a pitiful sounding cry coming from where I left her. 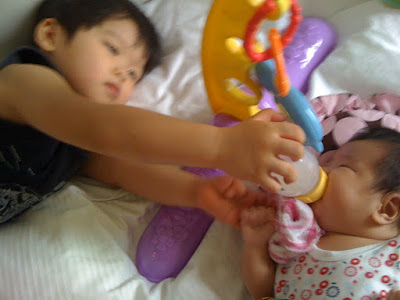 Jakey doing the milk shift
She loves nothing more than being cuddled by anyone. When we are out for a meal, she will make small noises pleading to be released from her prison of a pram and be carried to the dinner table. And then when she's carried out, she will just perk her eyes open and check out the environment. =) 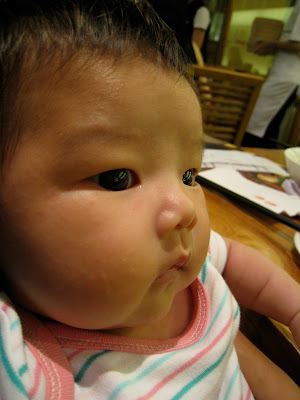 Cheeks overhang
At this point, she sleeps in till about mid day and then wakes up crying for a feed. Mostly, she has her last big feed at 3 in the morn and then sneaks in a few lil feeds in between.
Yes. I am my daughter's 24 hour portable snack bar. =)
The thing I love most about her is how cheeky she can be. She loves it when people talk to her in a singsong tune. And if she likes it enough, she will break out into a lil cheeky grin. 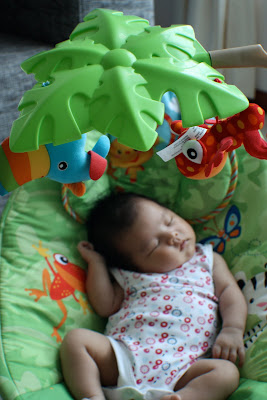 Sleeping on the swing. *best invention ever!*
Lately, she has been cutting down on her sleeping time and catching up on everything that she is missing on this world. Her favorite position is when we hold her upright and then turning her lil head around to check out the surroundings.
She's also realised who's her mommy. When I am out of her sight, she would make lil noises to see if I'd respond. And if I am busy doing other things, she will then use her lil complaining tone to let me know that she is not happy. Too cute, I'd say! 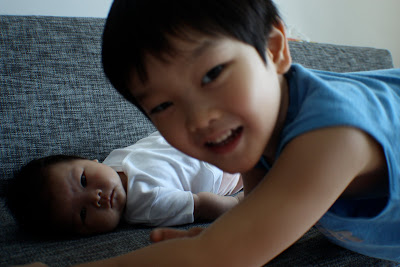 Mommy thinks I look like Kayden Kor Kor
She's now trying to do a lil flip so we're keeping our eyes out for that to happen soon!
Seven weeks has gone too soon, hunni. Dun grow up too quickly! Mommy loves cuddling you heaps!
Posted by Pam at 10:04 PM

Email ThisBlogThis!Share to TwitterShare to FacebookShare to Pinterest
Labels: Growing Up, Kate