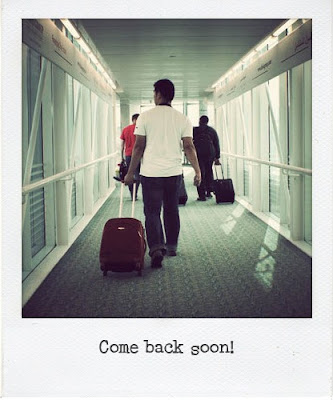 The husband left for Melbourne last night for a grand time of 12 whole days!!
Our house is finally ready and he's there for the inspection and handover which will occur a week later.
We've finally reached the end of the building chapter and now it's time to just finish some of the outstanding tasks like landscaping and fencing and then we'll decide what we want to do next.
One of the things about being heavily pregnant is the many restrictions that you have to endure when it comes to traveling. I guess carrying an almost 34.5 week bub in utero is a good enough reason to stay put for a while. =)
Plus, I've been feeling the fatigue a whole lot more in the last week so it's almost time for me to put my feet up and rest. But it's gonna be single mummy duties till he gets back and then we will be at the home run for this pregnancy. Scary thoughts!
We've spent a bit of time in separate places this year. More so, this year than any others. Usually, he only spends a day or two in Sydney but it's just been a longer stretch of time nowadays. And strangely, it's become quite a norm to just pick up the pieces of where he's left off when it's just me being here. I think it's a sign that we are all getting used to this traveling business for work. Kids, included.
I miss him when he is gone. Somehow the bed feels a lil empty and a part of your being is drifted somewhere else. Maybe this is what being life partners is, huh?
And the cutest thing that happens EVERY TIME the husband is not home for the night, the kids will ask, "Where is Daddy? How come he's not coming home?"
Sighz... come home soon Hunni. But have a blast in the old hometown!
Posted by Pam at 9:04 AM

Email ThisBlogThis!Share to TwitterShare to FacebookShare to Pinterest
Labels: Darien, House, Melbourne, Us