After our disastrous encounter at SNEC, we decided to seek a second opinion at Mt Elizabeth.
Dr Wong came recommended by my mum's boss and she's been in the industry for quite a while.
So we trotted up for our appointment on thursday, three days after Jakey's appointment at SNEC.
We waited quite a bit to see her because her clinic was full with her Feragamo-cladded Indonesian clients.
But can I say that what a difference it makes when the doctor is so kid friendly.
She let them play with her magnets. Gave Kayden something to play with whilst she was checking Jakey's eyes.
After discussing the initial diagnosis with her, she mentioned that it's a lil early and ohsocruel to make him go through all the tests again.
So after doing a refraction test, she suggested that we start him on glasses ASAP. However, instead of putting him straight up to the 500/600 degrees that was recommended by the ped opthamologist at SNEC, she wants us to start at 100 degrees and gradually shift his degrees in a span of weeks.
That made sense to us. We were not opposed to him wearing glasses but starting him at extremely high powered lenses did not appeal to us.
If this approach doesn't work, then she mentioned that surgery is still a distant possibility BUT we have to observe his progress in the next few months.
And this is what the kid looks like now. 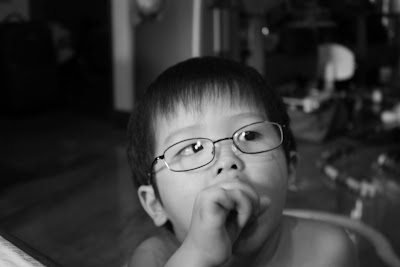 My lil Jerry Maguire kid!
Posted by Pam at 8:45 PM