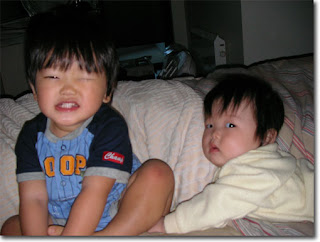 Lately, the boys have been communicating with each other in baby talk. It sounds like a secret language btw the two of them.

The lil one would be crawling and then Kayden would go to him and talk to him. He would share his food with him and feed him things like banana. When Baby J cries in the pram, Kayden would pass him some rice cereals to keep him quiet. All too funny..

Kayden's also been a lot more generous with his toys these days. He would let Baby J touch them and fiddle with them. However, he still feels the need to exude his authority when there's a "need" to. And then subsequently move all the toys out of his brother's reach.

That said, there have been moments when Baby J feels the need to speak his mind. There are times when he would make a loud growling sound when Kayden takes his toy away and show he's displeased.

Clearly, I have two assertive children. And loud ones at that. O boy... I see so much of me in them that it's not funny. I can imagine the conversations we would have in twenty years.
Posted by Pam at 10:11 PM

Email ThisBlogThis!Share to TwitterShare to FacebookShare to Pinterest
Labels: Boys