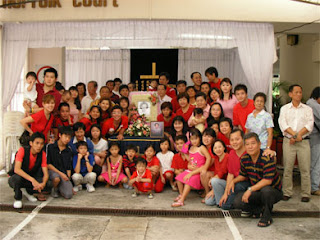 My entire family before sending my grandma off.

Darien and I headed back to SG for my grandma's wake and funeral.

I had to rush the application for Baby J's passport on Wednesday and thank God everything worked out well. I got his passport within the same day. Had some dramas with the people at the passport office and I will be dealing with that in the next two days.

We caught the flight at Wednesday midnight and arrived rather blurry eyed on Thursday morn. The folks were so excited to see the kids. After a short breakfast at McD's... my parents drove us to the funeral.

I met my sis and brother there. Everyone was just stoned from keeping the night. But we had a good chat and they were entertaining the kids.

I went to see my grandma. She looked so peaceful just lying there. But yet I knew that death caught her by surprise cos her roots were not dyed. And my grandma always had the immaculate black hair.

According to my auntie, Granny was feeling weak for the last three weeks after her fall. The day she went... she was just lying there on her bed trying to have a conversation with my aunt. However no words could come out of her mouth. She was just in agony. And then half an hour before she passed... her heart started pulpitating really quickly and then she started to breathe really heavily. After that, she shed a tear and mumbled, "Zhu ah*.." and just went.

The wake was like a family gathering. We gave eulogies of our beloved grandma. And it clearly showed us the impact she had on our lives. She was the person that brought forteen of us up. And we all knew her idiosyncracies and her personality... It was a good recap of our growing up days.

We spent the last night at the wake. Most of my cousins were there and we had a great time just catching up and remniscing on the past. How much fun we had in those days of living at Dorset Rd.

Time may have passed but yet we all still stayed the same. Not a single ounce of pride has dripped into our personalities whenever we gather. We were just cousins and that was all that matters.

It drizzled the day we sent our grandma off... But the skies cleared when we were about to set off. It was hard. No one could prepare themselves for this day. It was like our grandma was always there. She was an institution that is always around.

My eight cousins carried her coffin. It was our way of telling her how much we love her and that we would always be grateful to her for bringing us up.

We set forth for the crematorium and then had the last service there before we sent her off.

But I realized that while we were mourning her, we were also happy that we've set her free to go back home to the Lord. After all, her body was just getting tired of all the pain and she was just feeling awful most of the time.

When we went to collect her bones, we were quite the chirpy bunch. And I noticed the stark difference btw us and another family who were just so sombre. The joy of the Lord was just apparent and all of us felt a sense of peace when we saw her remains.

Grandma was put to rest at Choa Chu Kang. We all said good bye to her on that Sunday morning. Plans have been put in place for the annual family gatherings. And I think she would've been pleased about the legacy that she's left behind.

Email ThisBlogThis!Share to TwitterShare to FacebookShare to Pinterest
Labels: Ah-ma